Andrej Ivanuša is a publisher and designer of books, brochures, flyers and websites. He also runs a book and board game store. He was born in 1958 in Maribor and is construction engineer by education.

He is a philatelist, photography enthusiast and writer of science fiction. His first stories and poems were published already in school newspapers. In 2002 he published his first fiction book, children's fantasy adventure novel Čudovita potovanja zajca Rona in four parts. This was followed by science fiction novels Rheia (2007) and Svetodrev (2011), fable in rhyme Vilindar (2007) and collection of speculative stories Na robu sveta (2016). His short stories were published in various magazines, some of them were translated into Croatian, Serbian and English and published abroad. In 1994, he also wrote and published the first Slovenian philately guidebook Čar filatelije. He also wrote guidebooks Kaj moram vedeti o osebnem računalniku (1995) and Pravila za igro s kartami Remi (2009).

He also writes poetry, articles and essays. His articles on philately, computers, science fiction, mythology, folk medicine, money, financial history, space, astronomy and other topics can be found in numerous newspapers and magazines (Večer, Kapital, Win.ini, Tajnica, Denar...). He is the editor of online fanzine Jašubeg en Jered – Novice iz Drugotnosti, co-editor of the publication of the Zvezdni prah society, association of authors of speculative arts (he is also co-founder and president of this association) and collaborator of speculative literature magazine Supernova.

His publishing house Pro-Andy focuses on essayistic and fiction literature. Ever since its founding in 2009 he is a member of Rotary Club Maribor-Park, in 2014 and 2018 he was also the president. He received numerous awards, in the literary field he received Bronze Medal at the Istanbul '96 World Philatelic Exhibition for his book Čar filatelije. The same book won Silver Medal at the Fimera exhibition in Trbovlje. He also received the Drejček in Trije Marsovčki award for best fantasy story 2012 entitled Na konici grajskega stolpa. 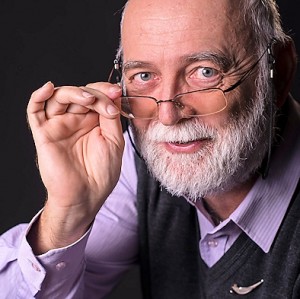 Round table: Translations of Fantastic Literature into Slovenian and Croatian language