Željko Luketić is a film and music critic, journalist, curator, chronicler and researcher of Yugoslav, Croatian and world popular audiovisual culture, underground and camp. From 1993 onwards he publishes reviews and essays for Radio 101, Kinoteka, Heroina, Hrvatsko slovo, Hrvatski filmski ljetopis, 3. program Hrvatskog radija, Hollywood, Filmonaut, Prosvjeta, Oris, Eye Magazine and many others. He was a film program associate at the Croatian Radio Television for shows Fatamorgana and Zvjezdana prašina from 1998 to 2001, as well as screenwriter and researcher for its documentary program for several prominent projects. He organized film nights dedicated to classic cult movies in club Mama where works by Alejandro Jodorowsky, John Waters and Russ Meyer were for the first time screened on Croatian soil. He was a vice-president of Croatian Society of Film Critics from 2001 to 2003 and a team member of Croatian Audiovisual Center's campaign for promoting audiovisual work in 2011. He was a jury and selection committee member for festivals 25FPS, VFF, DHF (also artistic director in 2015 and 2016) and others. He is a regular associate of Subkulturni Azil from Maribor and publishing house Dark Entries from San Francisco. He curated a series of exhibitions "The other side of Saturday night fever: socialist disco culture 1977-1983" and "Visual language of disco", as well as prominent compilations "Ex Yu Electronica III" and "Synth Yugoslavia". He co-edited anthology "Electronic Jugoton – Synthetic Music From Yugoslavia 1964-1989 ". He is also president of Jučer Danas Sutra – platform for audiovisual research Zagreb, as well as researcher and editor for film music project Tomislav Simović: Gosti iz galaksije (Fox & His Friends, 2017). 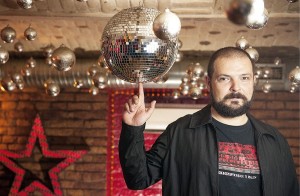 Željko Luketić: Out of Pan's favor: Alejandro Jodorowsky before and after Dune