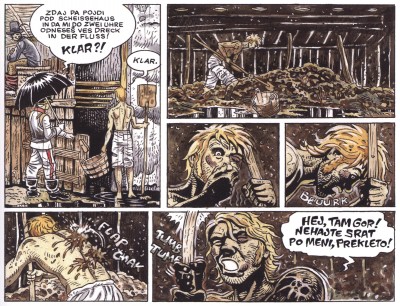 We are very proud to be able to announce, already for our first festival edition, the arrival of one of the best known and most renowned comic book artists in Slovenia.

Between 1987 and 1999 he published about 800 pages of comics in Mladina magazine under the pseudonym Vittorio de la Croce. He is a part of the so-called third generation of Slovenian comic book artists that was learning the ropes under editor Ivo Štandeker at Mladina. His comics from that time are politically charged, explicit and provocative, taking their themes from Slovenia's present and not-so-distant past. In 1999 and 2000 most of his comics were published in four albums. Between 2006 and 2016 he published five parts of Meksikajnarji, an extraordinarily ambitious and epic saga about Slovenian volunteers who were fighting for the Emperor Maximilian in Mexico between 1864 and 1867.
Mr. Smiljanić is also a cinephile, using cinematic language with great results in his comics. He wrote three books on film while constantly publishing numerous film reviews and articles. The legendary comic book artist Darko Macan once even said that »Smiljanić is probably the best writer of long stories in the ex-Yu region«.

We will honour this giant of Slovenian comics with an exhibition of his works. You will be able to find out more about his opus at a special Q&A session where he will also be available for questions and signing of his works. 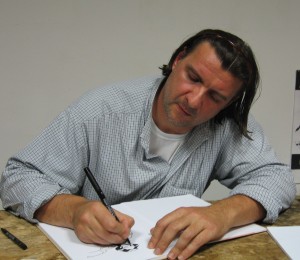