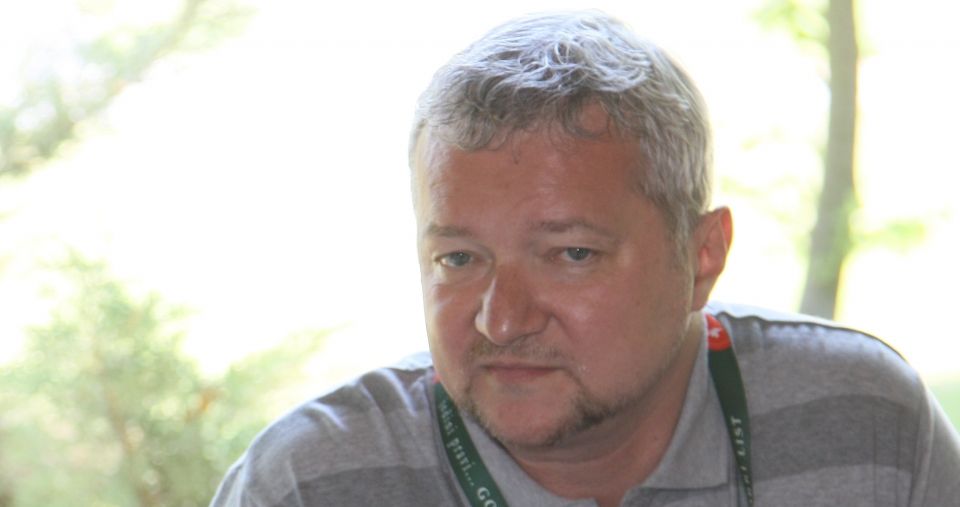 Dinko Tucaković, one of the greatest cinephiles from the area of ex-Yugoslavia, a wonderful man, guiding star and soul of Serbian film, has left us. With him, one of the brightest lights in these dark times for Serbian culture has been turned off much too soon.

Dinko was never lacking energy of effort – until his 53rd year he has accomplished as much as some would have managed in two lifetimes. But this is of little consolation; no one should be leaving this world so soon, least of all such a precious individual, in every meaning of the word.

His rich biography and bibliography are all too extensive, varied and well-known to resume them at this place and thus reduce them to just a few titles and activities. Live action films, feature and short; documentary films and series; books, articles, reviews, film reports; he was the director of the museum of Yugoslav Cinematheque, Member of juries of many international and domestic festivals, selector and advisor of various festivals, lecturer... Where can we even start, what should we emphasize, and what can we ommit?

Instead, I will subjectively choose some details and observations that most thoroughly display Dinko's character, view of the world and his various activities.

Dinko was one of the greatest genre film lovers in all country (already in Yugoslavia). With much enthusiasm, he was writing about Brian de Palma, Walter Hill and other directors of the new Hollywood at the time when older film critics ignored or scorned them. Alongside Nebojša Pajkić and Slobodan Šijan, he was a part of a young wave of fresh film thought in Belgrade in the beginning of 1980s and has, to the last moment, remained an instigator and protector of everything that was different, bold and original. His enthusiastic writings could be found in magazines such as Džuboks and Ritam, while the crown was the subversive collection Light in the Darkness (Svetlo u tami) that he edited and published for Yugoslav Cinematheque. It was an invaluable contribution to film thought of that time and has featured contributors from all Yugoslavia. During that time he was also writing for Slovenian Ekran magazine.

Unfortunately, the disintegration of Yugoslavia and the chaos of war have shaded his light during the dark 1990s and slowed down the activities which he has started in that time. For the same reasons he was also forced to postpone his filmmaking plans: his second feature was supposed to be an anthology of short gothic horror stories entitled The Tales of a Lost Soul (Priče izgubljene duše), inspired by Corman's Poe adaptations from the 1960s. Sadly, the war, sanctions and economic crisis of the 90s have stopped his plans and all that was made was just one, yet noteworthy episode – short film Berenice: Stronger Than Death (Bernisa, jača od smrti, 1990).

When he became the director of museum of Yugoslav Cinematheque, Dinko didn't allow his new function (as it often happens) to transform him into a boring bureaucrat that slowly turns into an exact opposite of everything he has fought for. On the contrary, in his new role he has selflessly and even more intensely continued his struggle for film with all the knowledge and love that only someone truly dedicated to film can possess. He has always remained open for collaboration and all kinds of help to the young. It was also thanks to him that all film publications I have collaborated on or have written I have also presented in the cinematheque museum.

With all this being said, it is not hard to reach a conclusion that Dinko was the soul of Serbian film, a fact that was confirmed by many film colleagues who have collaborated with him. Actually it would be hard to find someone in Serbia who had something to do with film in the last 20 years who hasn't got at least one positive story about the collaboration with Dinko. He was the one whose presence and help were taken for granted, the one who was always there when he was needed.

I will reMember Dinko as a man of good intentions, friendly and always in the mood for a joke, full of anecdotes from the film world, foreign as well as domestic, for he was a great expert on both. His activities were not confined only to Serbia, he was active and welcome throughout the region. For two years he was the president of the jury at Grossmann festival, where he each time convinced us with his love for youthful, fresh and different cinematic ideas. Together we have travelled to Slovenia and back home, which was a perfect opportunity to enjoy his »informal lectures« from the hidden history of film, for his knowledge was enriched by socializing with some of the greatest domestic filmmakers and thinkers, as well as with his own experience in filmmaking.

It is hard to come to terms with the fact that this is the end, that all these stories won't continue, that this friendship is over, swiftly and brutally ended in Dinko's best years. All that is left for us is to continue to keep him in our hearts and minds, as well as in our works, and to strive to follow the example he has set. Dinko, thank you for everything.