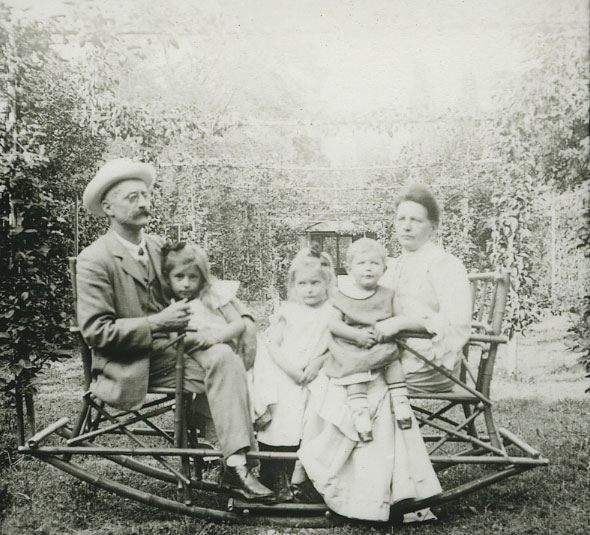 Dr. Karol Grossmann, pioneer of Slovenian cinema, was born in Drakovci as the first son of local landowner. He studied law in Graz and subsequently opened his own attorney's office in Ljutomer in 1901. At first he lived in the building of former District's Loan Office. In 1910 he moved into a new house on Main Square in Ljutomer.

He was an educated man of broad horizons, active in the fields of literature, theatre, translating and lectures. He initiated, as well as invested in local economic projects and was a great supporter of Slovenian cause in Ljutomer's social life. In first decade of 20th century he became intrigued by photography and film. In Dresden, Germany, he obtained »laterna magica« in order to display slides and movies, and also numerous cameras and an amateur 17,5-mm film camera. In years 1905/6 he shot the very first Slovenian movies: »Dismissal from Mass in Ljutomer« (Odhod od maše v Ljutomeru), »The Ljutomer Fair« (Sejem v Ljutomeru), and »In The Family Garden« (Na domačem vrtu). First two are actually photos brought to life and motion, which was the main characteristic of movies in their pioneer era. In the third one, showing his wife Matilda with a baby in her lap with his two daughters Draga and Božena running from the garden pavilion towards the camera, he explores different shots during a static frame. The movement of the girls indicates exploration of film's creative possibilities, and is characteristic of a new era of motion picture history. Thanks to Karol Grossman, ten years after the invention of a new medium, Slovenians were on same terms with other nations. His second movie »Fair in Ljutomer« was shot in the town's centre, which is also the centre of Events on Grossmann festival.

According to dr. Božena Grossmann and dr. Vladimir Grossman, in 1915 a non-commisioned officer of artillery stayed at Grossmann's house for a few months. It was Fritz Lang (1890-1976), who later became a famous director, known and celebrated for movies such as »Metropolis«, »Siegfried« (Die Nibelungen: Siegfried), »Woman In The Moon« (Frau im Mond), »M«, »Testament Of Dr. Mabuse« (Das Testament der Dr. Mabuse), »Man Hunt«, »Ministry Of Fear«, »The Woman In The Window«, »While The City Sleeps«, »The Thousand Eyes Of Dr. Mabuse« (Die 1000 Augen des Dr. Mabuse)... He attended family festivities and spent a lot of time in their father's library. Božena and Vladimir also reMember him sculpting in nearby pottery, which is also documented on memorial photo that Lang sent to Grossmann in 1916. The family legend proved to be real when dr. Meta Grossmann and dr. Jure Mikuž found two terracota vases and two busts (all of these clearly visible on aforementioned photo) at the attic of Grossmann's house in 1984. These sculptures are the only preserved works of art from Lang's pre-movie era. With Grossmann being an avid admirer of moving images as well as an expert on film techniques of that era, it cannot be excluded that he has at least partially influenced the creative development and artistic path of one of the greatest directors of the Golden age of cinema.