Iztok Sitar published more than 15 albums and illustrated more than 100 books and textbooks. Among other things, he published caricatures in the “Slovenec” newspaper in the 1990s and was creating comic series “Bučmanovi” for the “Dnevnik” newspaper for 10 years. In 2007, when we celebrated 80 years since the first Slovenian comic, he published the book History of Slovenian Comics 1927-2007. He also publishes under the name of “Ninel”. In 2008, he received the Golden Pear award for best youth literature for “Dnevnik Ane Tank”, and in 2013 he received award for best foreign comics 2012/2013 (11. Salon stripa, Beograd). At the 2012 Book Illustration Festival in Novi Sad, he received the award for best illustration of prose book (Dorota Masłowska - Poljsko-ruska vojna pod belo-rdečo zastavo, Modrijan, 2011). 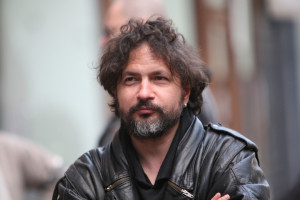