Riva Zmajoki (b. 1982) is a philosopher, poet and writer. She publishes fiction since 2005. Her conversation with audience was started by the story "Ormar", published in Književna republika. While working on her magnum opus, she published several novels in English on Amazon. Among them we can find Star Vestige: Uplift which starts an exodus towards the stars, and Dragons Handler which introduces stone dragons and their resistance movement. By jumping into the distant future, we can follow the Emperor's Advisor, chasing his young Emperor across the trails between the stars in the Onlooker saga which begins with Tsar's Road Trip. After nine finished novels, she is finally approaching the finishing of the first book of the Clubtail Asterism universe. 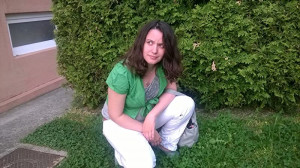 Riva Zmajoki: Dating in Fiction: How Style and Function Become a Calendar