This year's Grossmann Fantastic Film and Wine Festival, taking place from the 16th to the 20th of July in Ljutomer and Ormož, Slovenia, will treat genre cinema lovers with no less than 35 feature films, 13 documentaries and 33 short films from 36 countries.

Screening schedule will be published soon. In the meantime, take a closer look at this year’s films at the following link:

This year's guests of honour are director Sam Firstenberg, the absolute legend of 80s action cinema, and actress Christina Lindberg, one of the most remarkable icons of 70s exploitation cinema. At the closing ceremony on Saturday, they will receive the Honorary Vicious Cat awards for outstanding contribution to genre cinema. We will also pay them tribute with special retrospective screenings of AMERICAN NINJA, AVENGING FORCE, THRILLER – A CRUEL PICTURE and CHRISTINA LINDBERG: THE ORIGINAL EYEPATCH WEARING BUTT KICKING MOVIE BABE. Both guests of honour will also conduct special Master Classes at the festival.

Sam Firstenberg Master Class will take place on Thursday, July 18th at 20:00h at the Main Square in Ljutomer.
It will be moderated by Marcel Štefančič Jr.

Christina Lindberg Master Class will take place on Friday, July 19th at 21.15h at the Culture House.
It will be moderated by Nenad Bekvalac.

Our feature film competition program for the Vicious Cat award will feature six fierce films. Swedish psychedelic horror BLACK CIRCLE is directed by Adrián García Bogliano, receiver of the Vicious Cat 2016, and features a grandiose comeback by Christina Lindberg, who will be joined by soundtrack composer and co-producer Rickard Gramfors at the screening. Hungarian director Károly Ujj Mészáros, whose film Liza the Fox Fairy was screened in our 2015 competition, returns with tense thirller X- THE EXPLOITED, this time in person, together with the leading actress Mónika Balsai. British director Jack McHenry will come to Ljutomer to present haunting horror comedy HERE COMES HELL, where classic 1930s horror meets 80s splatter cinema. Tons of laughs and terror will also be delivered by Spanish director Daniel M. Caneiro who will be visiting us with his phenomenal found footage mockumentary GOD'S HILL. A truly special blend of 70s giallo glamour and Lynchian surrealism awaits you in British horror comedy IN FABRIC, courtesy of one of the leading contemporary genre directors Peter Strickland. Fantasy horror perfection with stunning visuals will be offered by impressive Indian folk horror TUMBBAD, directed by Rahi Anil Barve and Adesh Prasad.

The music documentary competition program for the Noisy Cat award will offer seven loud experiences. SING ME A SONG, directed by Miran Zupanič, is an in-depth portrayal of Slovenian singer-songwriter Vlado Kreslin, who will also attend the screening. Phil Cox's BETTY – THEY SAY I'M DIFFERENT will reveal the story of funk queen Betty Davis. Sami Saifa's THE ALLINS will present the story of punk rock provocateur G.G. Allin, seen through the eyes of his mother and brother. Jordan Albertsen's BOOM! A FILM ABOUT THE SONICS will bring the untold story of one of rock 'n' roll's wildest and most influential bands. Travis Beard's ROCKABUL will present Afghanistan’s first metal band District Unknown. Miha Čelar's KAMELEONI - THE BEATLES OF FORMER YUGOSLAVIA will take a look at the legendary Slovenian band that started a genuine craze in Yugoslavia in the 60s. Hanna Szentpeteri and Simona Jerala's BAND VS BRAND will show the daily work of Slovenian rock managers Maša Pavoković and Eva Kristina Filipčič.

In our DocuShock section, highlights include Italian documentary AQUARIUS VISIONARIUS – THE FILMS OF MICHELE SOAVI, directed by Claudio Lattanzi, who will visit Ljutomer to take us into the world of the greatest poet of Italian genre cinema, and American documentary GEORGE ROMERO: AN INDEPENDENT MAN, an in-depth look at the life and times of one of the greatest legends of fantastic cinema.

The short film competition program for the Slak's Vicious Cat award brings 13 films from all around the world, while a selection of 15 European short films will compete for the Melies d'argent award, given by the European Fantastic Film Festivals Federation (with Tomaž Gorkič's METOD representing Slovenia).

On Friday, the festival will for the first time also take place in the nearby city of Ormož, where there will be screenings of AMERICAN NINJA (with director Sam Firstenberg in attendance) and THE LAST SERB IN CROATIA (with Predrag Ličina, Sergej Trifunović and Krešimir Mikić in attendance) at the Main Square. 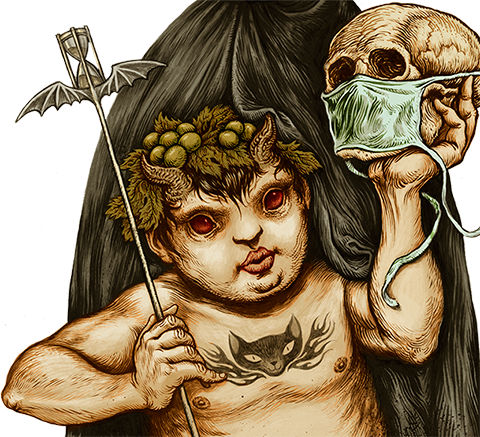